In recent decades, gaming has seen an explosion of different ways to play: Xboxes, PlayStations, mobile games, and the Steam workshop to name but a few of the innovations. However, far from eliminating the games of yesteryear, tabletop games have never seen as much variety and innovation. They can be great games for children and family to play together, improve their social skills and most of all, have fun!

In this article, we'll explore the basics behind tabletop games and give an overview of some of the most exciting titles currently on the market.

What are Tabletop Games?

Firstly, what exactly are tabletop games? In the broadest sense, they are what they say they are: games played on a table or other flat surface. Under this definition, they cover everything from card games like solitaire to strategy games such as Warhammer. However, when discussing tabletop games, most people think of the classic board games from their childhood: Monopoly, Cluedo, even Mouse Trap.

What Tabletop Skills are Used?

Tabletop games teach and bolster a range of skills in players, no matter their age. The complex rules teach comprehension, while their application forces children to use their minds tactically, creating strategies to win. They must focus on the game at hand, lengthening their attention span- which is all too often shortened by modern technology devices like iPads and other tablets.

Nor are the benefits confined to the mind. The tiny pieces require dexterity and good hand-eye-coordination to move.

Socially, the turn-taking nature of many games teaches patience and respect. In some games, players are expected to work together, providing a valuable lesson in teamwork. Perhaps most important of all, tabletop games teach the skill of losing and how to handle defeat. Thus, providing resilience in future.

How much tabletop games cost, depends entirely on the game you are playing. A pack of cards won't cost more than a few dollars, whereas the average board game comes in at between $20 - $45 (£15 - £35). However, games can venture upwards of $80, with complicated pieces and expansion packs to buy. If you want to play a miniatures game like Warhammer, it will require a continual ongoing investment with each piece costing tens of dollars.

If you're just getting started, or you want to try out a new game, here is a selection of some of the best games around:

We are a member of Amazon Associates platform and so we earn a small commission when you purchase products through our links (at no extra cost to you). 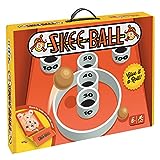 You don't need to go to the arcade to have fun: with Skee-Ball you can spend hours tossing the balls into the holes with your family and friends. Simply, set-up one of twelve different frames on the table and practice your aim, as you try to get the ball in the hole. Any balls that miss will roll back down the ramp, while scoring is achieved by getting the balls into one of the holes. The smaller the hole, the more points you rack up. Kids can go head-to-head or divide into teams, playing through the twelve frames, as the difficulty gradually increases. It's perfect for a kid's birthday party or some Sunday evening entertainment for the whole family. However, you can even play a single-player game, as you try to top your personal best. Then, the next time everyone comes round, you'll be set to show them how it is done.

As the game says, this is a mash-up of foosball and air hockey that has become the number #1 party game in its native Sweden. In this frantic game of dexterity, players move the magnetic handle to maneuver their striker, attempting to send the ball into their opponent's goal &ndash; or to defend their own. But be careful, avoid the magnetic biscuits in the middle, as you'll end up sticking to them, giving your opponent an open goal. The brainchild of Danish carpenter Mikkel Bertelsen, the remarkable invention is solidly made from real wood. Plus, it is portable enough that you can play it anywhere.

Bring this classic backyard game indoors with the Mini Cornhole game. In this version, two players pick a colour and then take turns using the finger catapult to fling their launching bags at the opposing team. The further up the other players board your bag goes, the more points you score. If you get it in the hole, you get three points. The first person to score 21 points wins. If there are more than two players, take it in turns flinging the launching bags. Or set-up a mini-tournament. With rounds and rankings for a whole afternoon of fun.

You might have thought curling was restricted to winter or the freezing temperatures of your local ice center, not so. With this tabletop curling set, kids and adults alike can take its turn sliding the tiny curling stones toward the target. The rules are similar to regular curling, with the person closest to the center of the target being the winner &ndash; that's if no one knocks them out, of course. With enough stones for two to eight people to play at once the game is perfect for all occasions. Plus, once you're done the mat rolls up, making it easy to store.

This game is a great quick-fire game that will give your brain a nice warm-up. The game features a pack of cards with different items on them. Each player must try to match an item from their own hand with the card in the middle and the player with the most matches at the end of the round wins. There are many different variations of games you can play with the Spot It! set too, so you can have a little variety in which mode you play.

Enjoyed that? Check These Posts Out

Board Games For Adults

Let us know your thoughts below by adding a quick comment!